7 Fantasy Epics set in the subconciousness of mankind 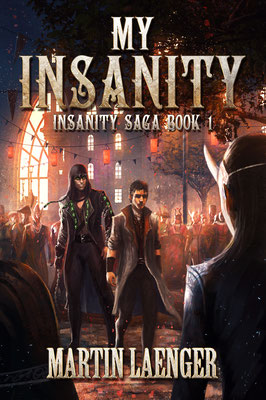 The Great War for the Fate of Mankind's Subconsciousness has Begun!

One day, Gwyn meets a mysterious figure shrouded in the shadows. The silhouette in a green-black coat calls himself Delirias. He explains himself to be an aspect, born from Gwyn’s very own soul. The problem? Only Gwyn can see and interact with him.

Haunted by Delirias, the aspect realizes his chance and thrusts the duo into a strange land - the Shared Subconsciousness of Mankind.

A world where nothing seems impossible and danger lurks around every corner. Strange creatures, Deadly Sins and much more stand in their way. Once Gwyn realizes that he is not the only human who’s trapped in this world, chaos erupts.

To survive, Gwyn will be forced to team up with his aspect Delirias, but at what cost?

The second book in the 'Insanity Saga'. Directly continuing the events of the first book.

Development will be adjusted to demand.

A short project that is set in the world of the 'Insanity Series'. Intended as a thank you to all readers. Will be made available to all mailing list subscribers for free. No direct spoilers for mainline series, but will contain in-depth lore events that make this a must read for every fan.

Currently in progress with more updates coming in the future.